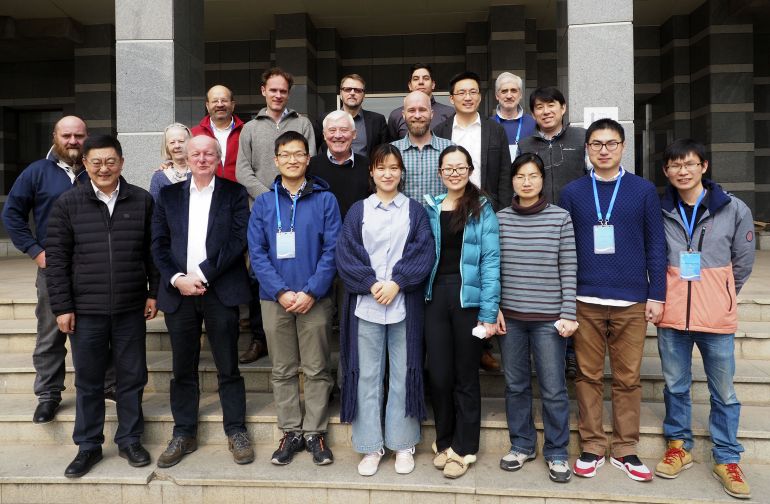 An important business item at this year’s meeting was the process of registering INQUA as a nonprofit organization in the Netherlands. The Executive Committee has made great progress in this direction, and it is expected to arrive a good destination for the 2019 INQUA Congress. Another topic of discussion was the successful launch of new INQUA website, thanks to Dr. Brian Chase (Secretary General), Pete Langdon (HABCOM), and the INQUA team. With the new website, Quaternary researchers can keep up to date with all the information about our commissions, upcoming meetings, and latest news. If you want to become a member of an INQUA commission, you can complete the Registration Form at INQUA.org

The annual meeting is also the time when commission presidents present proposals requesting funding for inter-congress activities. This year €115,000 was requested and we were able to fund 23 proposals for €105,000. The Executive Committee is working on a strategy that will optimize commission activities and engagement between INQUA members and INQUA activities. Development of commission activities for the 2019-2023 Inter-Congress period will be a top priority for this year.

INQUA visibility and communication has become a major item for the 2015-2019 inter-congress period. In this regard, Eduardo Alarcon (ECR Committee Chair) presented a report about Early Career Research Committee activities during 2017 focused to increase INQUA visibility. During the meeting, Lucien Von Gunten (Science Officer- PAGES) and Meng Wang (President-Young Earth Scientists) interacted with INQUA Executive Committee. Our mutual goal for the future is establishing and maintaining a strong collaboration and synergy between organizations.

INQUA and PAGES together with the University of Utrecht and Geological Survey of the Netherlands, have organized a four-day conference in August 2018 for early-career researchers (ECR), titled “Impacts of sea-level rise from past to future (iSLR18)”. The INQUA Executive Committee has approved funding to support the participation of ECRs and DCRs in this important event. Eduardo Alarcon (ECR Committee Chair) is representing INQUA ECRC in the local conference committee. Dr. Thijs van Kolfschoten (INQUA-VP) and Dr. Freek Busschers (Treasurer) have been instrumental in the organization of the conference.

Min-Te Chen, editor-in-chief of Quaternary International (QI) Journal, introduced the significant progress made by the team of associate editors. Quaternary International published a total of 54 SI volumes in 2017. The increased publishing volumes reflect our efforts to digest more and more community submissions to our journal. Dr. Franck Audemard (INQUA-VP) presented the call for nominations for 2019 INQUA Awards. These awards include the Sir Nicholas Shackleton Medal for Outstanding Young Quaternary Scientists, the Liu Tungsheng Distinguished Career Medal for Distinguished Service to the International Community in Quaternary Science and the INQUA Distinguished Service Medal. Closing date for nominations is 28th September 2018.

The next INQUA Executive Committee Meeting is appointed for the middle of January 2019 in Goa, India. Meanwhile, we would like to invite Quaternary researchers, ECRs and DCRs to be part of INQUA Projects for 2018.

"The Italian Association for Quaternary Studies (AIQUA) organizes a webinar series "All roads lead to Rome 2023" in preparation to INQUA Rome2023.

New faculty position in zooarchaeology, in the Anthropology Department at Texas A&M University